Presentations of rare bleeding disorders (RBDs) have a low incidence rate and therefore we, as emergency department (ED) physicians, may not be as familiar with these clinical scenarios, which can be subtle and require high clinical acumen to detect.

Acquired hemophilia A (AHA) is both rare and life threatening, and affects 1.3–1.5 million people each year, with 70% of these individuals experiencing a life-threatening bleed that may lead to death (22% mortality rate).1 This autoimmune disease is caused by autoantibodies to factor VIII (8) (FVIII), resulting in FVIII deficiency and a bleeding tendency. Occurrence of primary and secondary AHA is idiopathic more than 50% of the time, and the incidence is increased among postpartum women and among elderly men and women

In post-partum women, AHA tends to present one to four months after childbirth. Common features of post-partum AHA include severe ecchymosis, soft tissue hematomas, hemarthrosis, and severe life-threatening hemorrhage.2 In elderly patients with AHA, there are no differences observed in the distribution of the disease across sexes and it typically presents in patients with no prior history of bleeding.3

Higher awareness of AHA may lead to earlier diagnosis and improved outcomes. ED physicians are in a unique position to affect outcomes by identifying AHA quickly and implementing a treatment plan with your local referral network. In the ED, AHA should be considered when there are signs of easy bruising or bleeding, and whenever an acute or recent onset of bleeding is accompanied by an unexplained, prolonged activated partial thromboplastin time (aPTT).4  To assist with the categorization of bleeding, the Canadian Emergency Department Triage and Acuity Scale has classified triage of bleeding disorders as Level II or III depending on bleeding severity9. Routine lab tests (e.g., complete blood count [CBC], prothrombin time [PT] and aPTT) may help to detect AHA and if suspected, a consult with a hematologist is required. 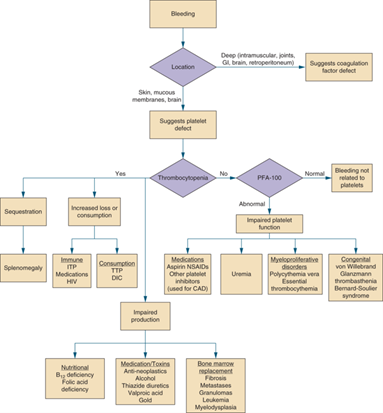 The objectives for AHA management include the following:

For AHA patients with active bleeding or risk of bleeding (prophylaxis of bleeding), individualized therapy should center around hemostatic control (i.e. the use of by-passing agents such as rFVIIa, aPCC and/or recombinant porcine factor VIII) to stop the bleeding, and the use of immunosuppressive agents for elimination/removal of autoantibodies to obtain stable and complete remission). However, AHA patients are susceptible to immunosuppression and severe adverse events. Therefore, the choice of therapy should be individualized and depends on the following:

Avoidance of invasive procedures will reduce the complications for massive bleeding and save costs. 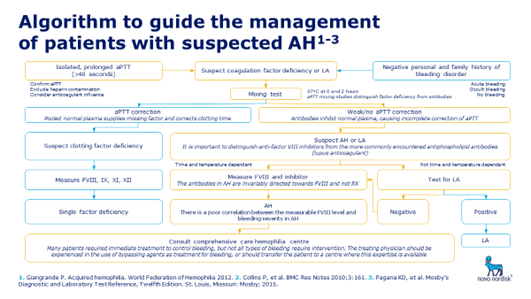 Easy bruising and bleeding may be signs of an underlying disorder.

CBC, PT, and aPTT are routine tests that may be used to detect some, but not all, bleeding disorders.

Order aPTT in cases of:

Consult a hematologist if a bleeding disorder is suspected.

Deficiencies of factor VIII (8) [Hemophilia A or Classic Hemophilia] and factor IX (9) [Hemophilia B or Christmas Disease] are the most common forms of bleeding disorders and are commonly referred to as hemophilia. Persons with hemophilia do not bleed faster than others; rather the bleeding is continuous. Significant blood loss can occur if treatment is delayed.

Hemophilia mostly affects males due to the X-linked inheritance pattern. The incidence of Hemophilia A  worldwide is estimated to occur in 1:5,000 live male births, while Hemophilia B is more rare with an incidence of 1:25,000 live male births; all ethnicities are equally affected. Factor VIII deficiency is four times more common than factor IX deficiency but the clinical presentations and inheritance patterns are similar.1

The severity of bleeding expected in an individual with hemophilia depends upon the severity of the deficiency. Normal plasma levels of factor VIII and IX in non-hemophilic individuals range from 50–150%.

The six major sites of serious bleeding which threaten life, limb, or function are:

All of the above require immediate assessment and intervention, and are characterized by:

Women can also be affected by hemophilia and other bleeding disorders. Women can be hemophilia carriers (i.e., have a genetic mutation on one of their X chromosomes resulting in abnormal factor VIII or IX), and like males, some will display symptoms depending on their factor levels. The level of factor activity determines the bleeding tendency and severity of symptoms in female carriers. Approximately 20% of carriers are symptomatic to some degree, while the remaining proportion of carriers display no symptoms (called asymptomatic carriers).2

VWD is the most common bleeding disorder in girls and women. VWD is an inherited disorder characterized by low levels of or non-functional VWF protein. VWF helps with clotting, so when it is either missing or not working properly, heavy bleeding may occur which is difficult to stop.3 In women, VWD may present as heavy menstrual bleeding, or may be brought on by childbirth. Diagnosis of VWD is made through a series of clinical tests (i.e., factor VII clotting activity, VWF antigen).4

Hemophilia A without Inhibitor11

When bleeding is severe, the appropriate dose of factor VIII product should be administered to result in a factor VIII level of 80–100%.

Mild Hemophilia A with Non-Life or Limb Threatening Bleeding

Hemophilia B without Inhibitor

The treatment of choice for individuals with hemophilia B (factor IX deficiency) is recombinant factor IX or else the patient’s product of choice. Plasma-derived concentrate is a suitable alternative in an emergency situation when recombinant Factor IX is not available. Fresh frozen plasma is no longer recommended for treatment of individuals with hemophilia B. Note that cryoprecipitate does not contain Factor IX.

When bleeding is severe, the appropriate dose of factor IX product should be administered to result in a factor IX level of 80–100%.

AHA should thus be considered in the differential diagnosis particularly in postpartum women and the elderly with new bleeding tendency or prolonged activated partial thromboplastin time who have no prior personal or family history of bleeding.

In approximately 50% of AHA patients, especially elderly patients, autoantibody development against factor VIII is idiopathic [2, 26, 27], indicating that the acquired inhibitors develop via an autoimmune mechanism.

During acute bleeding episodes, effective control of bleeding manifestations is the primary objective. However, the ultimate therapeutic goal is to eliminate the inhibitor and cure the disease. Hemostatic therapy with bypassing agents should be provided. Immune tolerance induction therapy has shown poor efficacy in treating AHA. Immunosuppressive treatment should thus be initiated to eradicate inhibitors as soon as the diagnosis of AHA is confirmed.

He tells you he has hemophilia B

Appears very uncomfortable. Unable to stand up straight or lie completely flat on exam bed due to pain

Keeps both hips and knees in flexed position

Guarding on palpation, no mass

No swelling, warmth or bruising to abdomen or over groin

Possible bleed must be on the differential given underlying hemophilia

Confirm the type and severity of hemophilia and if bleeding is suspected, always treat first before initiating investigations/imaging

Per the patient treatment protocol, he is given rFIX concentrate 110U/kg IV push for suspected major bleeding

Differential diagnoses at this point could include:

Timely evaluation and treatment of suspected bleeding is critical in hemophilia and patients should always be given clotting factor concentrate as soon as possible to prevent complications of uncontrolled bleeding (i.e. “treat first” or “factor first”).

Do not miss this bleed!

May be misdiagnosed because pain can mimic

Hip or lower back arthritis

There may not be a drop in Hgb initially

Pain in along iliopsoas bursitis distribution

Front of the leg

If the patient complains of numbness, tingling, or pins and needles sensation

If there is weakness on knee extension

Femoral nerve or vessels have been compressed or damaged

Her flow has increased significantly over the past 24 hours. She has soaked through several heavy absorbency pads and is now using a towel.

She tells you she has von Willebrand’s disease.

In the past she has had problems with:

Received DDAVP prior to lumpectomy for a benign breast lesion

She did not require DDAVP or VWF concentrate with her delivery as third trimester VWF levels were above 75% (i.e. normalized)

Her Factor First card states she should receive DDAVP for bleeding